International City of the French language

A former royal residence, the Château de Villers-Cotterêts has undergone numerous transformations throughout its history. However, it retains some vestiges of its rich Renaissance decor.
The restructuring of the building is entrusted to the Chief Architect of the Historic Monuments, Olivier Weets, while Projectiles studio ensureall the interior fittings and its scenography for the visit of the permanent collection.

The courtyard as a connecting space between the components of the ‘grand house’.

It was in this castle that, in August 1539, King François Ier signed the ordonnance making the use of the French language in official acts and court decisions. 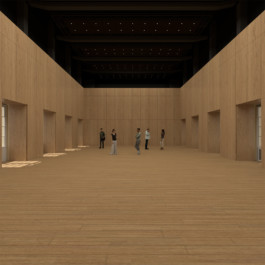 It distributes the ticket office, the temporary and permanent exhibition areas, the activity centre, the educational workshops, the artist residences, the bookstore, the café and other facilities. 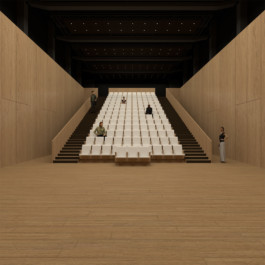 A culture in action: an expography between theatre and museum

‘Culture in action’, dear to Antonin Artaud, is at the heart of our scenographic conception of the visit of the permanent collection. Here, the collection of objects to be exhibited does not seem to be sufficiently exhaustive to form the backbone of the tour. The exhibition is more centred around a set of playful and participative experiences. Our purpose is to create an original scenography that is situated between the spirit of an expography space and that of theatre. Sometimes actor, sometimes spectator, the visitor is invited to participate. These experiences are mainly based on digital tools but leave space for human mediation as an alternative, sensitive, and didactic lever for sharing culture and raising awareness of the richness of the French language. 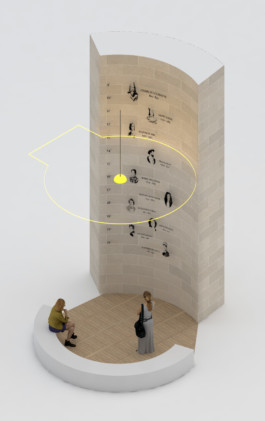 A space without borders
The major challenge of this project, the appropriation of the Cité Internationale de la Langue Française by the greatest number of people, depends above all on its degree of openness on an urban scale. The absence of physical barriers really helps to break down psychological barriers. A space that we enjoy walking through without restraint is a space that we can easily appropriate.
This large, porous and welcoming public space is destined to become an everyday place for the de Cottereziens, as much as a site visited at least once in their lives by a great number of tourists.
The courtyard as a connecting space between the components of the ‘grand house’.
The courtyard of the Jeu de Paume is the epicentre. It welcomes visitors and guides them towards the various activity centres. It is a capable, convivial and lively space, where visitors can take the time to relax, discuss, stroll around or take advantage of the events programme.

It accommodates the ticket office, temporary and permanent exhibition spaces, activity areas, educational workshops, artists' residences, the bookshop-boutique, the café and other services. The creation of a public crossing in the north wing integrates it into the urban itinerary in a new linking to the city, passing through the Offices courtyard and the Forest of Retz.

A lexical sky
The covering of the courtyard by a glass roof is accompanied by a treatment of its underside. Shadowed by day, lustrous in the evening, it is made up of suspended words. This lexical sky strongly characterizes this agora. Through the words and their cast shadows, the language invades the courtyard. The organisation of participative workshops open to the public could be the opportunity to bring out proposals for the choice of these words.
Adjacent to the logis Royal, the Jeu de Paume room has been transformed into a multifunctional auditorium with variable geometry, which can be easily reconfigured to accommodate any type of performance.

On the periphery, the space formed by the window openings offers an intimate posture with the landscape.
Emotional stimulation is as crucial as the acquisition of knowledge itself. The role of new technologies appears then in the foreground, both in terms of material mediation tools and interpretation devices. Their integration is elegantly worked out so as not to overload the spaces or compete with human mediation.
The French language has linked French people together and has strongly marked their identity for centuries. Because of its history, its numerous evolutions and its rich syntax, it constitutes a common base, an essential part of an intangible heritage. Its learning must become increasingly democratic so as not to constitute a criterion for exclusion but, conversely, to promote shared living.