The triennial of the Estuary, a summer event of contemporary art created by the team of the Lieu Unique in Nantes, invite the studio to work on an artistic installation. 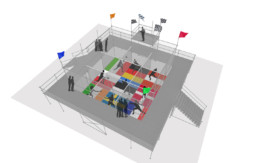 Let's turn the embarrassing game of the hot potato into an Olympic discipline!
To practise this discipline does not require excellent technique or great skill. You have to send the ball back everywhere, but especially not at home, without really knowing where it is going and just hoping for a bit of luck.

It is played on a grid of nine squares (defined by nine-country flags arranged in 3×3) separated by adjacent nets (of the same height as those of badminton). This grid court is encircled by a tubular structure, a scaffolding supporting a peripheral passageway from which spectators can admire the game from above the players. In a surveillance position, it is the referee who throws the ball in the middle of the grid. The players have to send them back, to one of their "neighbouring countries" (it doesn't matter whether the destination is voluntary or not, whether the gesture is elegant or not).
The game stops when there are no more balls. The player who has the fewest balls lying on his field is the one who has won the game.
The field thus takes on the appearance of a monolithic, geometric, three-dimensional structure, where the contrasts of metal, nets (reinforcing the effects of moiré and visual blurring between players) and colourful flags (the painted floor of each field in the colours of a country) are in perfect harmony.

There is nothing sophisticated about such a sport, but it can produce unexpected results. It is a sport of pure reflex, without any strategy or calculation. It is the most skilful, the most spontaneous, the quickest to send the ball back from wherever it comes from, that wins the bet. Hot-patat ball has an undeniable burlesque dimension because the public also enjoys the players' loss of bearings (each having eight opponents, it is challenging, if not impossible, to anticipate and read in advance the game of each one). The public knows more than the players, they give pieces of information to them, to warn them of an imminent attack.
Like any sport, hot-patat-ball is a metaphor as the application of a paradox. In this physical proximity of players, each condemned to play their part, at the risk of noise, we can see the translation, in bodies and movements, of a persistent individualism within a collective structure. We can even read in it an absurd and buffoonish declension of the unproductiveness of the "nimby" ideology ("not in my backyard") which refuses to consult and hinders a good number of development projects. But rather than denounce it, we prefer to enjoy it and hope that it can give rise to some fine acrobatics. Let's be sporting! 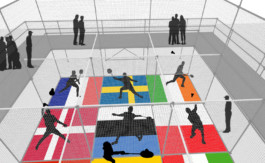 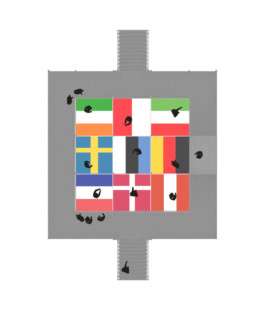