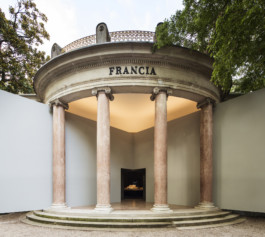 Modernity as a fold 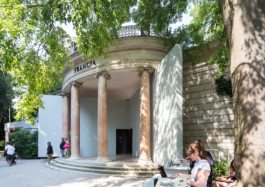 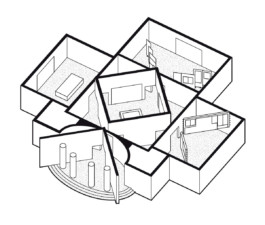 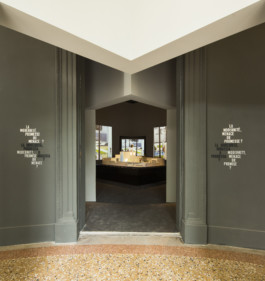 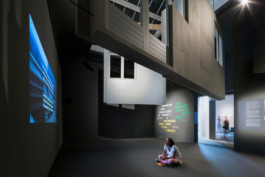 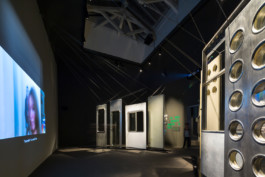 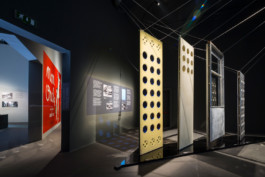 A kaleidoscopic and Borgesian staging 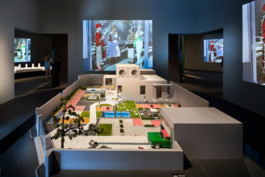 The French pavilion was built in 1912 by a Venetian municipal engineer, following France's refusal to commission an architect, considering the event to be minor. This architecture is thus the result of a non-choice. As we were unable to rebuild another pavilion, we wanted to mark the break by giving a good readability to the contemporary intervention. An event such as the Venice Biennale of Architecture goes beyond the framework of a simple cultural exhibition. The biennale is presented as a large chessboard where each Pavilion is identified as one of the characteristic pieces of the board. The strength of a pavilion lies in the clarity and speed with which it catches the visitor's eye. A form of instantaneous capture, of emotional and sensitive immediacy through a strong landscape offered to the visitor. Here, a unique film is projected simultaneously in all the spaces. The visitor can thus follow the filmed narrative throughout the visit. The unique landscape generated refers to the imagination of kaleidoscopes.

Evoking Modernity and the spread of these ideals in Venice, especially in a building such as the French pavilion with its very particular architecture, inevitably challenges us as architects and scenographers. This presentation raises the question of the identity but also of the impact of French representation during this 14th biennial. The success of a pavilion at each new edition often lies in the speed with which the visitor is seized: a form of instantaneous capture, of emotional and sensitive immediacy offered to them, even before they discover the nuances of the scenographic journey and the subtleties of the content on display. The strength of the subject matter and the simplicity of the layout that accompanies it, the uniqueness of the treatment through the deployment of a limpid interior landscape marking the time of the visit, seem to be the best vectors to achieve this objective of success.

In order to guarantee vistas between the spaces, to manage the crossings of visitor flows and to integrate consultation areas, we built four thick walls, set at 45° angles and pierced at both ends (and not in the middle).

The deployment of these themes is characterised by the use of the same scenographic composition.
In order to appear coherent with each other and to underline their attractive potential, the visual axes linking them are decisive. The use of space has been homogenized in the different areas. At the level of the three peripheral rooms, it is organised as follows:
→ a filmic narrative with an immersive dimension, projected on the back wall located in the perspective of the entrance of each room
→ a large model in the centre of the space
→ a graphic wall opposite the projection
→ two seats allowing you to watch the film, contemplate the model or read the texts.